Facial recognition is a category of biometric security. Other forms of biometric software include voice recognition, fingerprint recognition, and eye retina or iris recognition. The technology is mostly used for security and law enforcement, though there is increasing interest in other areas of use. 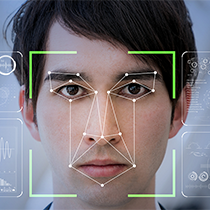 How does facial
recognition work?

Many people are familiar with face recognition technology through the FaceID used to unlock iPhones (however, this is only one application of face recognition). Typically, facial recognition does not rely on a massive database of photos to determine an individual’s identity — it simply identifies and recognizes one person as the sole owner of the device, while limiting access to others.

Beyond unlocking phones, facial recognition works by matching the faces of people walking past special cameras, to images of people on a watch list. The watch lists can contain pictures of anyone, including people who are not suspected of any wrong doing, and the images can come from anywhere — even from our social media accounts. Facial technology systems can vary, but in general, they tend to operate as follows:

The camera detects and locates the image of a face, either alone or in a crowd. The image may show the person looking straight ahead or in profile.

Next, an image of the face is captured and analyzed. Most facial recognition technology relies on 2D rather than 3D images because it can more conveniently match a 2D image with public photos or those in a database. The software reads the geometry of your face. Key factors include the distance between your eyes, the depth of your eye sockets, the distance from forehead to chin, the shape of your cheekbones, and the contour of the lips, ears, and chin. The aim is to identify the facial landmarks that are key to distinguishing your face.

Step 3: Converting the image to data

The face capture process transforms analog information (a face) into a set of digital information (data) based on the person's facial features. Your face's analysis is essentially turned into a mathematical formula. The numerical code is called a faceprint. In the same way that thumbprints are unique, each person has their own faceprint.

Your faceprint is then compared against a database of other known faces. For example, the FBI has access to up to 650 million photos, drawn from various state databases. On Facebook, any photo tagged with a person’s name becomes a part of Facebook's database, which may also be used for facial recognition. If your faceprint matches an image in a facial recognition database, then a determination is made. Of all the biometric measurements, facial recognition is considered the most natural. Intuitively, this makes sense, since we typically recognize ourselves and others by looking at faces, rather than thumbprints and irises. It is estimated that over half of the world's population is touched by facial recognition technology regularly.

EnR’s facial recognition software searches an existing database of faces and compares them with the faces detected in the scene to find a match. Face Recognition detects faces in the camera’s field of view – as many as 15 at the same time – and matches them against faces previously stored in the database. Anti-spoofing is provided through “liveness” testing without the need for a stereo or 3D camera. Faces can be enrolled in the database from existing still images or from the video camera itself.

Recognition is available in both real-time and off-line modes and enrollment is available from both video and still images. Facial recognition is achieved by analyzing multiple images per face and can be achieved in around 0.5 seconds depending on resources.

Face Recognizer is available with a REST API/SDK for OEM partners and application builders. Easy integration of alerts is achieved through http/JSON and an open architecture.

Runs on Linux or Windows for server-based deployment, 1-16 cameras per PC based on CPU capacity. In-camera/embedded, facial recognition software works with various camera platforms and popular chipsets running Linux. On-cloud it is available as a Web Server Application and through Cloud Web Services API Interface.

Perfect for access control applications either in-camera or on-server. Identify persons of interest and unwanted persons.

Anti-Spoofing and No Gender/Race Bias

Liveness testing with 2D cameras, and models developed with multi-ethnic and gender datasets to ensure no built-in bias

We Have Great Answers